Antoine V. Bellande Jr. (1869-1924) was known as Newt.  He was born at Back Bay on Harvey Hill the 10th day of October 1869.  Newt Bellande was a bon vivant.  He appears to have led a carefree bachelor life.  His chosen occupation was bartender.  He probably learned this trade from his older brother, Arbo, at the Depot Saloon. 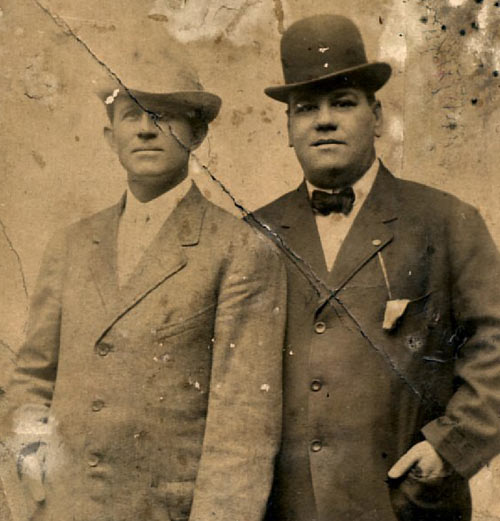 A few anecdotes about Newt Bellande have been passed down through the years, but most pertain to his life in New York.  While researching other subjects in The Biloxi Herald, I found numerous articles in the time period 1892-1901 concerning his life.  From the journalistic works of this era, I will give you a picture of Newt's life as portrayed by them.

In August 1897, Newt Bellande acquired one of the finest bred pointers in Mississippi from George J. Williams of McComb.(The Biloxi Herald, August 14, 1897, p. 8)

In September 1898, Newt left the Charm Saloon on the beach where he was the barkeeper to the same position at the Depot Saloon.(The Biloxi Herald, September 10, 1898, p. 8)

In 1899, he was working at the Pelican Bar located at the corner of Pass Christian (now Howard Avenue) and Croesus Street.  The proprietor of the Pelican was M. Perez.  The following article appeared in The Biloxi Daily Heraldon October 6, 1899:

Newt Bellande, one of the best mixologist in this section of the country has taken charge of the Pelican Bar and will be pleased to serve his friends with the choicest liquid refreshment.

An innuendo about the character of Newt Bellande appeared in The Biloxi Daily Herald of February 27, 1900:

Newt Bellande, the genial and handsome manager of "The Pelican", is enjoying carnival sights in New Orleans today and seeing the elephants generally.

Newt must have been a gregarious and sporting fellow.  One of his friends was A.O. Bourdon, Jr. who was in the retail liquor business.  They would hunt quail and travel to New Orleans on occasions.  Newt Bellande was enamored with hunting dogs.  On one occasion he acquired a "catch dog", which was described as being a most valuable animal and he delighted in relating to friends and acquaintances of the canine's acute intelligence.(The Biloxi Daily Herald, October 30, 1900, p. 8)

Although he remained single, he must have enjoyed children as the following excerpt from The Biloxi Daily Herald would indicate:

Newt Bellande says he is particularly happy this week.  The circus is coming, and he is going to take two or three small boys there to give them an opportunity to see the sights, and he wants to see them enjoy themselves.  He doesn't care for circuses himself.(The Biloxi Daily Herald, October 31, 1900, p. 8)

Our handsome young friend, Mr. Newt Bellande, who has for some time been managing the business of O.J. Brule, in this city, is now taking a well-earned vacation, at the expiration of which we understand he will go into business for himself at the corner of Delauney Street and Howard Avenue.  What ever he enters into he will make a success of, and his friends will all wish him a full measure of it.(The Biloxi Daily Herald, June 10, 1900, p. 8)

Newt Bellande went into business with a man Biloxi merchant, Sam Levy (1864-1900+), in August 1900.  They opened a bar called the Opera Saloon "in the new and handsome building at the corner of Howard Avenue and  Delauney  Street ", (now G.E. Ohr Boulevard).  It was advertised as stocked with the "finest and purest imported and domestic wines, liquors, cigars, etc."  His partner, Sam Levy, was a traveling salesman who resided at 222 Magnolia Street.  The Opera Saloon was in spaced leased from Lopez & Dukate.(The Biloxi Daily Herald, November 7, 1900, p. 4 and Harrison County, Mississippi Chancery Court Cause No. 1359-February 1901)

As demonstrated by the following reports from the March 27, 1901, The Biloxi Daily Herald, Newt must have been a pioneer in the marketing field:

We are indebted to our genial friend, Newt Bellande, of the firm of Levy & Bellande, proprietors of the Opera Saloon, for one of the handsome glass penholders, with case, that are being distributed amongst the patrons of that establishment.  It is a very neat and clever advertising scheme, yet something worth having.

Messrs. Levy & Bellande have just added a most pleasing attraction to their Opera Saloon, in the shape of a magnificent electric piano, which plays many selections, including some of the very latest and most popular airs of the day, as well as others of a classical character.  It is a late invention, and under the manipulations of Newt Bellande.  We will predict in advance that it is going to be a drawing card.  Newt knows all about it, or if he doesn't he will make you believe so anyhow.  Go and hear it play.

On July 13, 1901, the following petition appeared in The Biloxi Daily Herald:

We Sam Levy and Antoine Bellande, Jr. white male persons over the age of 21 years and residents of said city, do hereby apply to your honorable body (Mayor and Aldermen of Biloxi) to grant us a license in our names to sell and retail in less quantities than one gallon vinous, malt, spirituous, alcoholic, and intoxicating liquors in the property known as the Opera Saloon.

The license was granted August 21, 1901, and was probably renewed annually.

Unfortunately, the business relationship between Newt and Sam Levy soured.  Mr. Levy filed litigation in 1901 in the Chancery Court of Harrison County, Mississippi alleging that Newt Bellande was failing to perform on his contractual obligations to him.  Their agreement called for Newt Bellande to make a monthly salary of $50 and receive 2% of the gross revenues of Levy's saloon business.  The first year's gross sales were $17,000, but had fallen to about $1000 per month.  Mr. Levy accuse Newt Bellande of hunting too much and not managing the saloon business.  He also claim that Mr. Bellande did not have an accurate accounting system and that he spurned all offers from Levy to withdraw from the enterprise.  In early February 1902, Sam Levy withdrew his action against Newt Bellande at his own expense.  In June 1905, William Baltar owned the Opera Saloon.(Harrison County, Mississippi Chancery Court Cause No. 1359-February 1901)

On February 3, 1903, the "City News" of The Biloxi Daily Herald, stated that Newt Bellande had departed the Mississippi coast for New York City.  Newt joined a fellow Biloxian and long time friend, A.O. Bourdin Jr (1868-1959).  Mr. Bourdin was the proprietor of the Charm Saloon at Biloxi and also operated a small bar at 1225 Broadway, in the Big Apple.  Newt Bellande was going to be Bourdin's bar tender in New York.  A.J. Bourdin (1873-1912) was managing his brother's Biloxi establishment during his tenure at New York City.(The Biloxi Daily Herald, February 3, 1903, p. 6)

In the spring of 1908, Ulysses Desporte (1861-1927), a leading Biloxi seafood dealer, while on the East Coast seeking new markets met Newt Bellande in New York City and reported that he was managing a fine cafe and doing well.(The Biloxi Daily Herald, June 4, 1908, p. 1)

In May 1911, Newt Bellande received attention for his 'mixology' skills in the Big Apple.  He was the bartender at Louis Martin's Hotel and began serving 'Southern drinks'.  Newt introduced New Yorkers to such regional favorites as: the New Orleans fizz; Sazerac cocktail; Ojean cocktail; New Orleans sour; and the mint julep.  Locally, Newt Bellande was remembered as:

"a favorite 'mixologist' here for many years......one of the best natural chaps in the world and has a lot of friends and acquaintances here who are glad to hear of his success."(The Daily Herald, May 23, 1911, p. 1)

Bellande family lore relates that Newt may have run a concession at a horse race track in New York City or Saratoga Springs.  David Bellande of Kirkland, Washington remembers a letter from Newt to his grandmother, Florence, requesting money for some of his ventures.  He told her that he "owned an interest in Madison Square Garden".  Ruth Bellande Ragusin remembers that upon his death in 1924, his body was sent to Biloxi by rail.  Newt's brothers had to pay for his burial in the Biloxi Cemetery.

Regardless of the anecdotal stories, Antoine V. Bellande expired at New York City on May 19, 1924.  His corporal remains were brought to Biloxi on the L&N Railroad Train No. 37 by Mr. and Mrs. H.F. Richardson.  George Wagatha remembers that Newt Bellande was so large that a special coffin was built to accommodate his body mass.  It is believed that he neither married, nor had any progeny.  At the L&N Depot, Newt’s corporal remains were met by members of the Biloxi Elks Lodge and relatives and escorted to the Ben O’Keefe Funeral Parlor.  Funeral services for Newt Bellande were held on May 22, 1924 at the Church of the Nativity of the Blessed Virgin Mary by Reverend Keenan.  His corporal remains were entered in the Bellande plot in the Old Biloxi Cemetery.  He had been ill in New York for about six months and failed to respond to medical treatment.  Victor Ougatte came from Mobile to attend the funeral.(The Daily Herald, May 22, 1924, p. 2)

Pallbearers for Antoine V. Bellande’s funeral were Adolph Abbley of Pass Christian; Louis Staehling; Hugh Latimer; George Purcell; John B. Reynoir; and J.R. Meunier.  A large contingent from the Elks Club were in attendance to honor the memory of their fallen brother.  The Richardsons expected to return to their home in New York on May 24, 1924.(The Daily Herald, May 23, 1924, p. 3)